Providing Phytocannabinoid-Rich Products. All of our products come from hemp that is produced with organic practices, and solvent free. 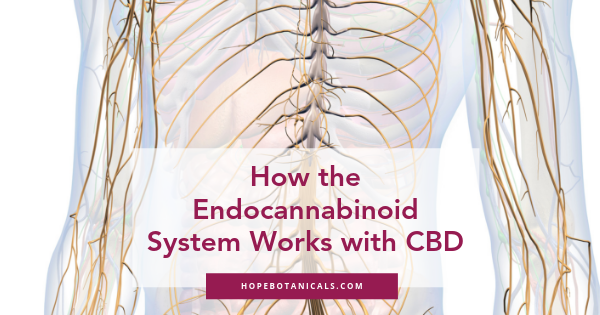 In order to fully understand how CBD is beneficial to us, it’s important to understand the endocannabinoid system.

Our bodies have many systems. Our circulatory system exists to circulate blood and transport important nutrients throughout the body. Our respiratory system takes in oxygen from our surroundings and rids the body of carbon dioxide. Our digestive system breaks down food and converts it to energy in the body.

If we could sum up the function of the endocannabinoid system in one word, it would be: BALANCE.

The endocannabinoid system (ECS) exists to keep our bodies in a sort of “sweet spot.” The ECS balances pleasure, energy and well-being. It also gently prods the body back to a healthy state when facing injury or disease.

The importance of the endocannabinoid system can’t be overstated! It plays a critical role in the regulation of disease in our body. It heavily supports the immune system by keeping the immune system from being either over- or under-active.

The endocannabinoid system regulates all kinds of things, like inflammation, pain, bone health, growth of new nerve cells, fat and sugar processing, mood, energy, brain health, and hormone balance. We are hard-pressed to think of a disease or condition that isn’t related to one of those things!

The body has many internal processes that are continually either building things up or breaking them down. The ECS is constantly monitoring these processes to make sure that there is the right balance of building and breaking. When there is too much of one or the other, the ECS swoops in to restore the balance.

Think of it as the “behind the scenes” system that is working to make sure that your other body systems are all operating optimally.

In 1992, Dr. Raphael Mechoulam discovered that animal bodies produce endocannabinoids.  Endocannabinoids are a type of neurotransmitter. Neurotransmitters are chemical messengers in the body that transfer signals between neurons in the nervous system.

The use of “cannabinoid” is a little confusing, but he termed these neurotransmitters “endocannabinoids” because they were so similar to the plant-based cannabinoids found in cannabis.

There are currently over 100 phytocannabinoids that have been identified in cannabis. However, there is not extensive research on almost 90% of them!

Two of the most studied phytocannabinoids are cannabidiol (CBD) and tetrahydrocannabinol (THC.) CBD is the most plentiful phytocannabinoid found in all varieties of the cannabis plant. (You can read more about cannabis varieties and the difference between hemp, hemp oils and hemp seed oil in this blog post: https://hopebotanicals.com/2019/03/cbd-oil-vs-hemp-oil/)

THC also gets a lot of attention because it is the compound in cannabis responsible for the “high” that cannabis users experience.

It’s difficult to understand the full scope of what the endocannabinoid system does for the body, and how cannabinoids like CBD can help, without talking about anandamide!

Anandamide is a type of endocannabinoid neurotransmitter that has been nicknamed the “bliss molecule” because it is a pleasure and reward regulator.

Remember that endocannabinoids are made inside the human body? If anandamide had a phytocannabinoid (remember, plant-based cannabinoid) twin, it would be tetrahydrocannabinol (commonly known as THC.)

(If you want to impress your friends at your next barbeque, you can tell them that anandamide is an endogenous analogue of THC. That’s the scientific term for all of this!)

THC is the compound in cannabis responsible for the “high,” because it acts like a major flood of this bliss chemical.

However, not all cannabinoids work the same way.

THC binds directly to these receptors, flooding the body with a large amount of a “bliss molecule” lookalike. This causes a high.

CBD does not bind directly to these receptors. Instead, CBD works indirectly by blocking enzymes that break down the body’s own anandamide. When there is more anandamide in the body, there is more CB1 activation and a more active and effective endocannabinoid system.

If THC grabs and hangs on to the receptors, think of CBD as a football lineman, blocking and tackling enzymes to make sure that anandamide (the guy with the ball), gets to the end zone.

Although CBD doesn’t bind directly to the CB1 or CB2 receptors, there are many, many other types of receptors in the brain. CBD does directly bond to some of these. Many of these receptors have anti-depressant, anti-psychoactive, anti-cancer and other functions.

You can see the CBD is immensely helpful in improving the overall function of the endocannabinoid system, which is to nudge the body back to balance when faced with illness or injury. CBD helps the body to heal itself.

For even more information on the endocannabinoid system, you may want to check out these articles and books!